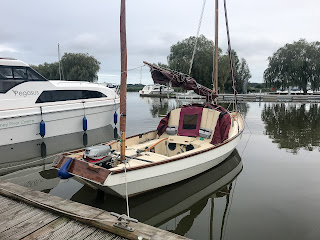 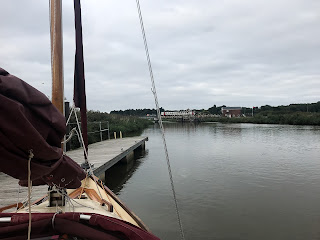 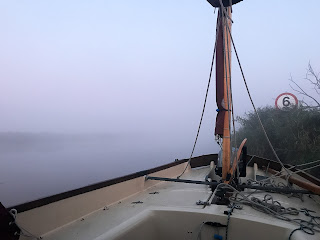 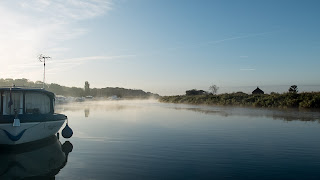 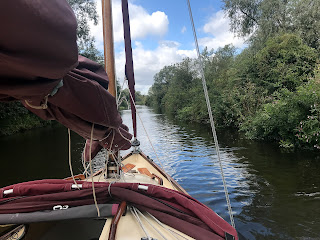 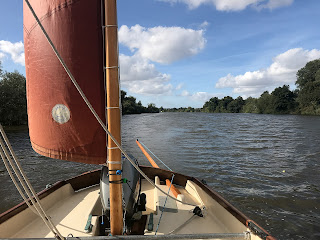 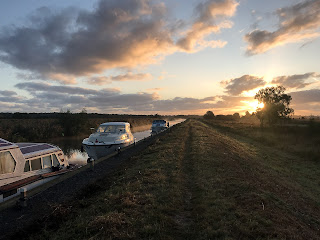 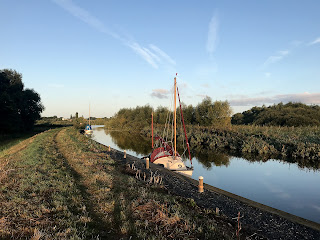 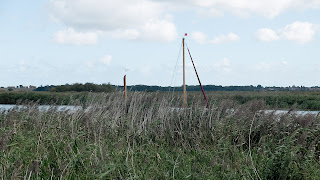 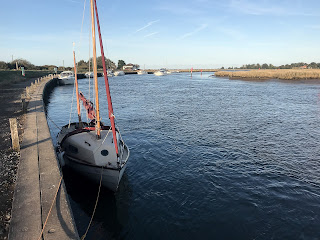 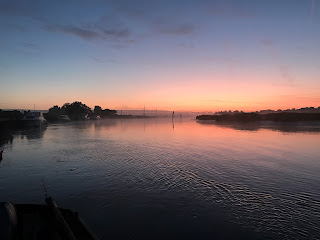 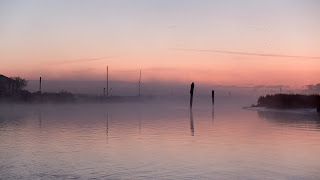 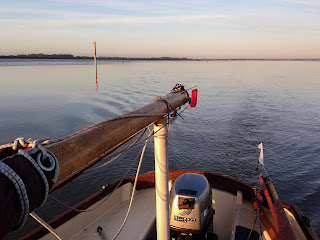 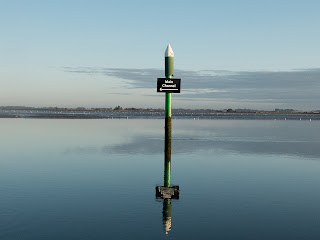 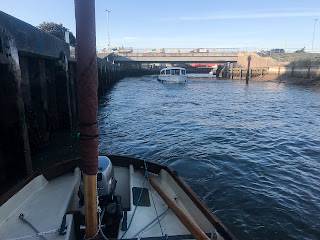 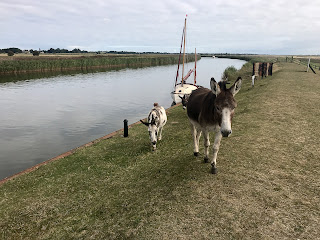 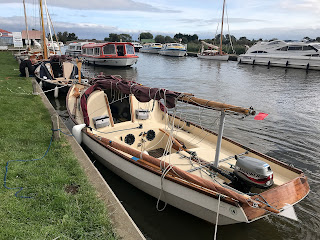 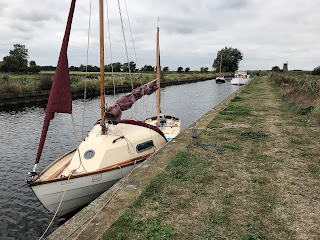 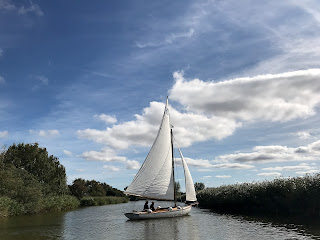 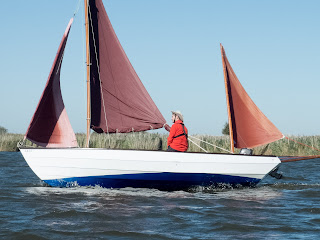 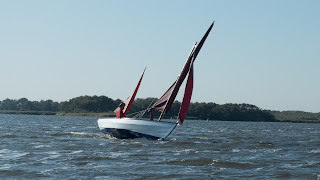 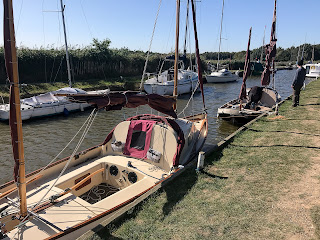 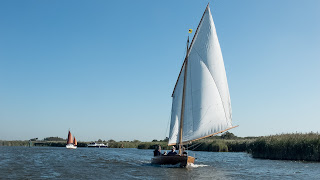 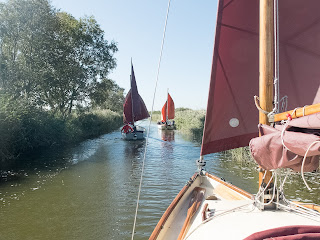 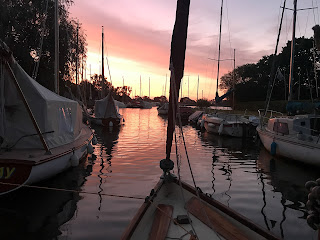 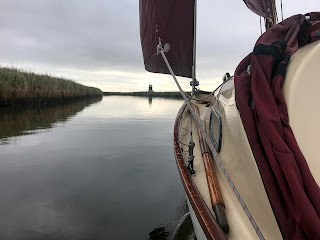 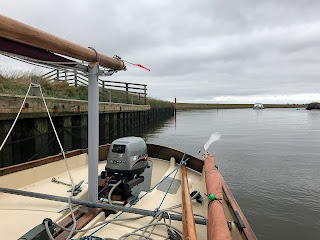 Mooring at Scare Gap for de-masting 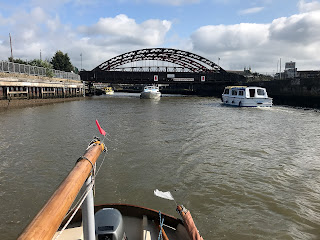 The Norfolk Broads – Travelling between Southern and Northern Broads

This was the fifth trip to the Broads with our Coaster. On one previous occasion we had crossed Breydon Water after sailing up the coast from Lowerstoft to Great Yarmouth. However, this was the first time we’d traveled between the Southern and Northern Broads and although all things worked out fine, there are a few points gained from experience, as not everything is made clear by the Broads Authority.

Heading north is best to arrive at Berney Arms with time to spare and lower your mast there. It takes an hour or less to motor across Breydon Water, especially as the tide will be with you. The aim is to arrive at Great Yarmouth at low (slack) water. The Broads Authority state this should be 1 hour after low water time, however from experience its more like two hours. Just after passing under the Breydon Bridge there is a de-masting pontoon on your left, tie up there and you can watch for when the tide actually goes slack and then motor straight through Great Yarmouth.

Our mistake was to carry on to the de-masting area at the Yacht Station, this is not recommended. You will be there at low tide, the dock sides will be high and the step ladders are not user friendly, with no handles to pull yourself up. I tied to the ladder and then stood on the cabin roof so I could throw a rope around a mooring post. You are also in the river and vulnerable to passing hire boats. If you are there before slack water, there is a noticeable current against you. Like all dock sides, these are not very boat friendly.

What the Broads Authority does not make clear is there is a de-masting mooring at Scare Gap, which is about 4Km up river from Great Yarmouth, so it is easiest to carry on to this and raise your mast there. These moorings are not marked on the map but are about 500 metres west of Ashtree Farm Drainage Mill. However, you will need to lower the mast again at Acle Bridge. The River Bure is quite narrow and there is only a small current with you, so if there is any West in the wind it is unlikely you’ll make much progress by sailing, so you may decide its easiest to just leave the mast down. At Acle Bridge there is some moorings about 500 metres before the bridge. Once through the bridge the Broads Authority moorings are likely to be full of hire boats but on the south side of the river the restaurants moorings are quite long and a short stop at the far end should go unnoticed.

The return trip heading back south is easier to manage. Go under Acle bridge and if the wind is with you, raise your mast and sail to the Scare Gap moorings. You can then lower the mast, wait there and time your arrival for slack water at Great Yarmouth and then just motor through. It takes about 45 minutes from Scare Gap to the Yacht Station.  However, even then you will find the current will still be running across Breydon Water. Once back at Berney Arms you can raise your mast and wait for the flood tide to take you up to Reedham. The Breydon Bridge will raise for you, so you could use the pontoon there to raise the mast and then sail to Berney Arms.

There are two other potential stopping places on the Bure, neither marked on the map. One is another de-masting pontoon at Runham, which is near Five Mile House Drainage Mill. The other is a short area on the north bank of the river near Runham Mill, which has some posts to moor to.

Speaking to a couple of local sailing boats, their advice was to arrive “late” at Great Yarmouth, in that way you’ll arrive at true slack water, make best use of the tidal flow and avoid the hire craft, which are probably the greatest hazard on the Broads, especially those under the control by someone wearing a hat that says “Captain” on it !