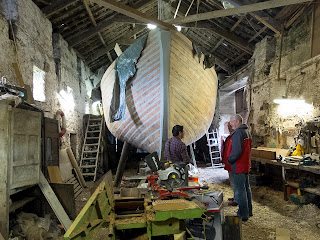 Just outside of Baltimore is Hegarty's boat yard, where the AK Ilen is being restored. This boat was built in 1926 at the Baltimore boatyard, before it left for the Falkland Isalnds, where is spent most of its working life. It was brought back to Ireland 1997.
http://www.ilen.ie/what-we-do-2/ilen/ 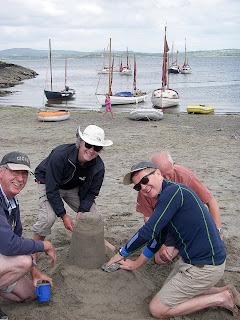 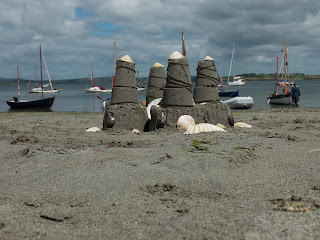 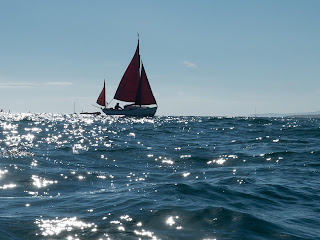 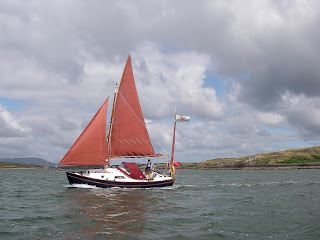 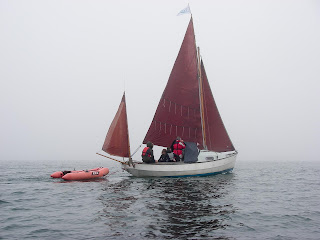 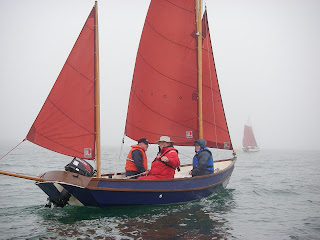 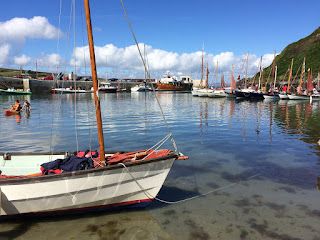 The Baltimore Rally was a great success and every credit to those who organised it. The weather remained generally very good, in fact it didn't rain once during our two week stay in Ireland. It is a fantastic sailing venue and everyone very friendly and helpful. As well as great sailing, there was also a very full social programme.
http://www.baltimore.ie/
There are two good slips, one is in the harbour and the other is used by the RoRo ferry but they are steep and although clean, are best used near high water. There was plenty of place to leave trailers near the old railway station. A new toilet block has been built next to the harbour, including showers, which cost 3 euros in tokens, available from the harbour master. There is a floating pontoon in the harbour but this gets very busy with RIBs, we used this for some nights and cost 10 euros per night. We also anchored in The Cove, near the low water line, for two nights. We spent another night on the pontoon on Sherkin Island, you pay at the hotel. Although this was quite busy during the day with day trippers in RIBs, it soon quietened down in the evening. The harbour master managed to remain calm, as at times it looked quite stressful time with so many boats in the harbour.
http://www.atlanticboat.ie/
http://www.visitmyharbour.com/harbours/east-and-south-of-ireland/baltimore/
http://www.sherkinisland.eu/
Baltimore was quite busy and not everyone paid much attention to the double yellow lines but we found we didn't need to use the car and left it in the main car park, which is free.
Taking the boat over to Ireland was quite easy. We used the ferry from Holyhead to Dublin and got a 20% discount with Stena as we were AA members, although I don't think this is a regular offer. Officially you are not allowed to carry flares (dangerous cargo) and only a small amount of fuel. We did take passports and SSR documentation but these were never checked. Both our car insurance and AA relay were covered in Ireland. On leaving Dublin Port the easiest route is to take the M50 tunnel, which cost 10 euros during peak times and 3 euros, evenings and weekends, there is a pay booth for this, so you can pay cash. However, you have to then take the M50 motorway which you need to pay electronically, which I did on a iPhone and credit card and we were told that they do chase UK drivers who do not pay. The road network down to Cork was excellent but these are toll roads and you'll need to be prepared to pay 1.90 euros on two occasions. There are wide lay-bys on the road and we filled up with diesel soon after leaving the M50. There were no actual services once you are away from Dublin. The road out from Cork to Baltimore is fine but does narrow for the last part once through Skibbereen. It is worth filling up with fuel for both the car and boat here (there is a shop in Baltimore but no fuel), there is a large garage on the left once you are through the narrow centre part of the town.
The return drive is just as simple until you leave the M50 tunnel and pay booth. We needed terminal 2 and this was a left junction straight after the pay booth, it is easy to miss and then you would end up in the centre of Dublin. To help avoid this, it is advisable to use the far left lane at the pay booth.

Email ThisBlogThis!Share to TwitterShare to FacebookShare to Pinterest
Labels: Rally